On or between May 2, 2020 and May 12, 2020, Salmon is accused of communicating with an undercover detective who was posing as a 14-year-old girl on a social media website. In that conversation, Salmon allegedly offered to provide money in exchange for sexual conduct with the girl and her 16-year-old cousin. Salmon was arrested after he arrived at a designated location to meet with the girls.

Below is the booking photograph of Salmon. 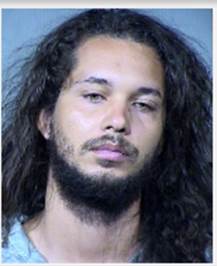