AG Brnovich Obtains Over $90,000 In Restitution from Pfizer for Deceptive Advertising

PHOENIX -- Attorney General Mark Brnovich today announced his office has obtained a consent judgment with biopharmaceutical company Pfizer Inc. (“Pfizer”), following an investigation into the company’s business and advertising practices for its copayment coupon program. As part of the program, consumers were told that they would “pay no more than” $15 or $20, for example, for certain drugs – but ended up spending far more at the pharmacy cash register.

“Accuracy in advertising is required and certainly so when dealing with healthcare and pharmaceuticals,” said Attorney General Mark Brnovich. “My office has and will continue to protect hardworking Arizona families from inaccurate claims regarding the true cost of their medications.”

The consent judgment resolves allegations that Pfizer deceptively marketed its copayment coupon program for its Estring (which treats vulvar and vaginal atrophy due to menopause), Quillivant XR, and Quillichew ER (“Quillivant”) (which treat ADHD), and Flector Patch (an NSAID patch that treats acute pain) products when it distributed these copayment coupons to consumers throughout the state without clearly and conspicuously disclosing the material terms and conditions. 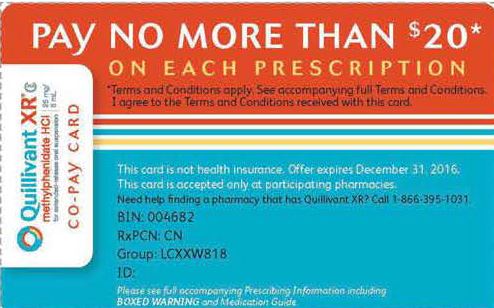 Pfizer has agreed to change the text of copayment coupons to explain that patients could “pay as little as” a certain amount, a process Pfizer implemented as of early 2018.

The Attorney General’s consent judgment requires the company to pay $94,527.23 in restitution to over 1,600 consumers, as well as $30,000 to the state for costs and attorney’s fees.  Pfizer also must cease use of “pay no more than” language in printed materials and copayment coupons when the terms and conditions reveal that some consumers may pay more.

Consumers will receive one restitution payment.  Arizona consumers eligible for restitution will be contacted by Pfizer directly, with no action necessary on their part.

This matter was handled by Assistant Attorney General Dylan Jones.